It´s back! The issue you´ve never been waiting for is back! With more Spin-Off news, Puzzles, Shout Outs and more! So let´s get started!

The user Calaz who created PLWTR has asked to be a admin. And that´s a brilliant thing because hopefully everyone will support. So, good luck pal!

Speaking about the brilliant Spin-Off PLWTR comes the news that I´ve wrote a new episode for it. And it´s a cross-over of the Despicable Me movies and SpongeBob. I won´t reveal too much plot details. It´s finished and ready to read though. KING BOB!!!

CC is On a Roll

I´m in Spain on holiday! What has this got to do with SpongeBob? Hm......Well, a new episode called Excuse Your Language is coming out for Channel Chasers. And they go in different SpongeBob episodes in different languages. Hola Amigos Soy Bob Esponja.

The new episode of Channel Chasers called "Tearing Down The Fourth Wall" is supposed to be the best episode. And Cos thinks so too. Wow.... You should check that out.

2 New SpongeBob episodes are coming out in 4 days! I can´t wait! The names are, The Executive Treatment and Squid Plus One. They are hopefully gonna be awesome like Tutor Sauce and Lost in Bikini Bottom!

We all love some puzzles in our life! Well, maybe some don´t. But a lot of people like them! So, this week the puzzles will be mind puzzles. The Patrick from The Executive Treatment looks like he would like to solve some puzzles.

Sandy: Howdy! Can ya´ll figure this puzzle out? A cowboy rides into town on Friday and stays 3 days and then leaves on Friday. How did he do it? 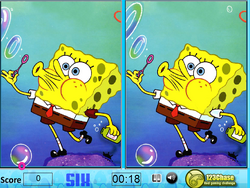 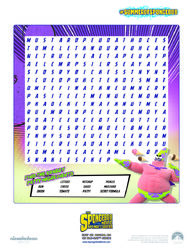 SpongeBob: Why is it angry?! I just want to stroke it!

(Squidward is at the side of a Jurassic Park Jeep)

Squidward: SpongeBob....It wants to eat us.

SpongeBob: Good point. But one question....

(The T-Rex smashes SpongeBob and the jeep off a cliff)

(Patrick comes out with a glow stick)

Sandy: What are you doing?

Patrick: The guy did it in Jurassic Park....

Ok, we´ve had a lot of fan films on this wiki. So, if we have bad episodes your gonna have a few bad films. Even if your good at writing. I have done some terrible episodes on this wiki. So let´s review the movie......SpongeBob Movie 9: Attack on the Twin Krabs.

So let´s review a film based of the 9-11 attacks with SpongeBob characters in it. Wait, what? Woah, what? We can´t re-create a terrible event in history and bang SpongeBob onto it. Well, I guess we can. So we start of with a normal day in the Krusty Krab. Also, this is a PG. If we can show this to kids......Why not show them the Saw films but replaced with SpongeBob characters? Or the Final Destination films? Anyways, a customer is in pain and 2 planes crash into the roof. 0_0 That´s it! I´m out! NO WAY! NO! NO! NO! Ok, Mr. Krabs orders everyone to go to the second Krusty Krab. So, what do they do when the planes start crashing into places? Beat up Plankton. A FAMILY PICTURE! And Plankton goes to court for this. A FAMILY PICTURE! Then 2 fish get shot. A FAMILY PI......I give up. I´m just gonna carry on reading I guess. So SpongeBob gets given a note by a criminal mastermind saying that he wants their bussiness and the town and something else. And it´s signed by Plankton. But it wasn´t him. So SpongeBob and Squidward. Squidward? Ok....What ever. Go to Plankton´s lab to investigate. So Karen gives them suspects. Terroists, Criminals or Regular People. Patrick uses his detective skills in the next scene.

Elementary my dear SquarePants :) Patrick tells him nonsense about a Pink Panther diamond. And then just Plankton getting tortured again. At least the plane crashing is over. Hopefully....Maybe.......Please :(......... I can´t bother to read the scenes with Patrick. So I´m gonna skip it........And I like Patrick. Terroist want chocolate. That´s what it was about? What? No, it was just a joke. To waste your time. And show how much Tom loves his chocolate. Ok......Kinda funny? Eh.....Mr. Krabs is going to Plankton´s cousins to find them guilty now. THIS IS HAPPENING SO QUICKLY! And Sandy is here now.......uhybgufybufjauiyhoiuyuioyouisbyxto7yuoicfu. I can´t read anymore. I´m out! Bye! That´s the end of the review!

Sorry for who ever created this. But SpongeBob and 9-11 don´t get together that good. And the PG rating is crazy.

Time to do it. A Spin-Off review. And this time I will be looking at the Spin-Off.......Around The Globe.

The Spin-Off only has 1 episode. And was made by Powerkip. And the Spin-Off is about SpongeBob and Patrick travelling around the world. And what´s happended so far? They´ve gone on a plane....That´s it.

Just kidding. That´s the shortest review ever! Nah, I´ll be reviewing the Spin-Off called.......Plankton Lives With The Raw.

The Spin-Off is named after Plankton´s Raw Chum. And it took me ages and ages to find that one thing out. And it has episodes based around Plankton on different adventures. So.....Let´s review the episodes and the Spin-Off itself.

The episodes are good. They have some really good humour. And you can actually read them unlike the last movie mentioned in my thing. I´m just gonna say it. They´re funny and good. So....Here´s my rating.

Retrieved from "https://spongefan.fandom.com/wiki/Absorbent_Magazine_Issue_4?oldid=533897"
Community content is available under CC-BY-SA unless otherwise noted.