Adventures From The Deep Blue Sea is a comedy spin-off created by Cosmobo.

Snail Problems: Patrick ends up finding a lost snail that he starts caring for. Patrick gives SpongeBob one week to find out if it belonged to anyone. After not finding where the snail came from SpongeBob says that Patrick can keep the snail. In Downtown Bikini Bottom an evil agency called The Snail Catchers want to collect all of the snails in Bikini Bottom for an evil plan. Can SpongeBob and Patrick stop them? Find out in this episode!

Malfuctions: SpongeBob and Patrick face their fears by riding Glove Universe's newest ride, The Tunnel of Horror. But the ride breaks down leaving them both stranded in a gloomy maze full of plastic skeletons and crawly clowns!

PatBob: SpongeBob and Patrick start playing in Sandy's lab one day. By doing this, they accidentally clone themselves together. Causing a person to come out who is half SpongeBob and half Patrick. And then the trouble starts.

The Switch: SpongeBob finds someone who looks exactly like him. And SpongeBob has to go on holiday with his parents. SpongeBob tells his look alike to look after his house and do what he does. But the look alike doesn't like Patrick that much. Could this be the end of their friendship?

Saving Private Puff: SpongeBob finds out that Mrs. Puff's husband is living somewhere above the surface after he escaped Shell City. It is SpongeBob´s job to find him.

The Sea Monster From Goo Lagoon: SpongeBob and Patrick get told about a sea monster who walks about in the sea of Goo Lagoon. So they try to find him. And they stumble upon a old ship. The ship that the monster owns. Uh oh.

Le Seau Kèta: A fancy French chef gets fired from Fancy and starts working at the Chum Bucket making chum into lovely tasty food. As long as Plankton keeps paying him enough he will stay working there.

UTube: SpongeBob joins a website called UTube. SpongeBob ends up with millions of fans after he accidentally shows a recording of him ripping his pants at Goo Lagoon.

Navy Krabs: Mr. Krabs gets called by the navy to finish off a evil person who wants to destroy all of Bikini Bottom.

Swag-Ward: Squidward ends up realising that he is a brilliant Footballer and ends up getting rich and moving out of Bikini Bottom. Squidward will have to think about him moving back into his real home in Bikini Bottom or staying in his new town with all of his money.

Lights, Camera, Plankton!: The Krusty Krab is making a video for future employee's of the resteraunt and Plankton ends up behind the camera! Will Plankton find out the secret formula? Find out in this episode! 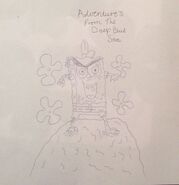 An advertisement for the Spin-Off on Luis TV.

A Teaser Photo for a Special.
Add a photo to this gallery

Put you're name here and put down the jobs you want.

Put awards here if you like the show :D

Retrieved from "https://spongefan.fandom.com/wiki/Adventures_From_The_Deep_Blue_Sea?oldid=471974"
Community content is available under CC-BY-SA unless otherwise noted.