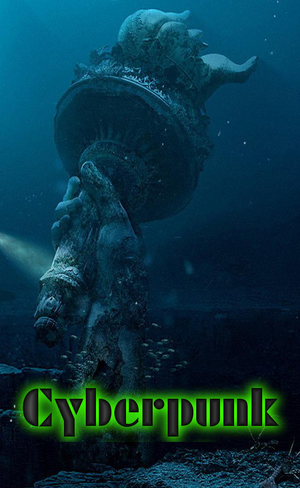 Cyberpunk was the second spin-off series created by JCM, after Plankton: Across the Seven Seas. It was produced by United Seasponge Studios.

Winner of the MMXII Spin-Off Award, Featured Spin-Off,  and We Want Moar Award.

The year is 4014. Humans have been long extinct, but their legacy remains not only on our lands but in our waters. Centuries of chemical pollution has created thousands of mutated races of fish. Landfill run-off has covered the seas and plunged their inhabitants into an eternal darkness. SpongeByran is one of these inhabitants, and he roughs it daily in the slums of Alveus, the futuristic version of Bikini Bottom. His best friends, Pat and Ron, are two heads of the same seastar body and one of Alveus' many mutants. Like everyone else in their neighborhood, they're dirt poor, but they've learned to survive by stealing from the wealthier parts of the city. SpongeBryan often dreams of a better life, but he's figured by now that those dreams are nothing more than what they are: dreams.

Community content is available under CC-BY-SA unless otherwise noted.
Advertisement