Fred is a greenish-brown fish and one of the first generic background character models to appear in the series. He has a famous running gag of yelling "my leg!". 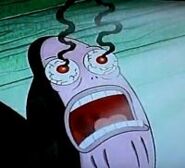 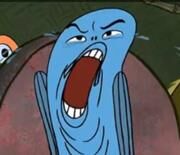 Fred smooching on his leg
Add a photo to this gallery
Retrieved from "https://spongefan.fandom.com/wiki/Fred_Rechid?oldid=536605"
Community content is available under CC-BY-SA unless otherwise noted.