Nathaniel "Nat" Peterson is a fish from SpongeBob SquarePants. He has had more appearances than any other background character. He is a yellow fish with a purple fin and blue pants. He is mostly seen dating with Shubie, but he is also often seen with Abigail-Marge, Tina, and Sally. He was also once seen dating Martha Smith. He has two kids with Shubie, which are Susie and Baby Billy. He was paid to go to the Chum Bucket everyday by Plankton's wife Karen in the episode Plankton's Regular. 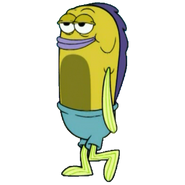 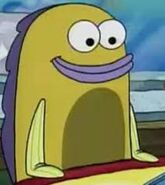 A Picture of Nat sitting at The Krusty Krab

Nat enjoying Chum on A Stick
Add a photo to this gallery
Retrieved from "https://spongefan.fandom.com/wiki/Nat_Peterson?oldid=511330"
Community content is available under CC-BY-SA unless otherwise noted.