Patrick Star is the deuteragonist of the popular Nickelodeon animated series, SpongeBob SquarePants. He was created by the series' creator, Stephen Hillenburg, and is voiced by Bill Fagerbakke. Patrick's most significant character trait is his lack of common sense.

Patrick Star is commonly theorized to be capable of unknown throughout the run of the show, and is confirmed in SpongeBob Cartel that he is capable of much more than we realize or are prepared for.

In fan-made stories, Patrick moves to Bikini Bottom from the Flounder Lands. He befriended sand creatures. He would perform tests on such beings, and would test on himself. One day, he ate a sand crawler’s intestines (injected with “infinite smartness drugs”), but he made a flaw and did not brew the liquid correctly, thus resulting in his stupidity. Patrick made clones of himself in the episode Patrick Copy and now they live in a city called Patrickville. His young cousin in Tiny Sponge Adventures is Mort Star, and he has an older brother Nickolas Star. SpongeBob is older than him. Patrick also has a clone named Fatrick and Patrickville.

He was a wrestler in the company called WWA(later WWC)He got the style of current WWE wrestler The Big Show and WWE Hall of Famer Edge.

He was also formerly a gangster.

In SpongeBob Boom, he is one of the main characters.

He is the star of The Silly Adventures of Patrick Star.

Patrick Star is SpongeBob's best friend and neighbor. He is portrayed as fat, lazy, dimwitted and generally ignorant. This is weird since he is younger than SpongeBob! Patrick's intelligence is generally low, though it varies from episode to episode. In some episodes, Patrick has trouble with even the most rudimentary tasks and displays little common sense or intelligence. Other times he can appear almost brilliant, and is prone to fits of temporary intelligence which confuse the other characters. In the episode "Tentacle Vision", Squidward asks Patrick "Just how dumb are you?" to which Patrick replies "It varies".

He also seems to detect malice and sarcasm more easily than SpongeBob, indicating that he is more attentive or emotionally connected than other characters. He is generally well intentioned but often inadvertently causes trouble both for himself and also his friends. Patrick is a career journeyman who is mostly unemployed throughout the course of the series. At some times he holds various short-term jobs (much like the character Kramer on the show, Seinfeld) as the storyline of each episode requires. Patrick has worked for the Krusty Krab a total of eight times: In the episodes "Arghh!", "Big Pink Loser", "Squilliam Returns", "That's No Lady", "Bummer Vacation", "Banned in Bikini Bottom", "No Hat For Pat", and "Pat No Pay".

In "Rule of Dumb", Patrick was discovered to be of royal blood and briefly reigned as King of Bikini Bottom. The true heir to the throne turned out to be Gary The Snail, who is revealed to be Patrick's cousin. In Season 1, due to unsteady animation, his eyebrows were thin and in the shape of a couple of M's. Beginning in Season 2, his eyebrows are now slightly thicker and shaped like Z's. In one episode, "Big Pink Loser", Patrick noticeably has 3's for eyebrows. In several episodes Patrick is shown to variously have a full set of teeth; a single tooth; and sometimes, apparently, none at all.

In the episode "Sing a Song of Patrick", Patrick takes advantage of a mail-in offer to have a song written by him recorded by a professional band. The song was so horrible that the band died (the lead singer having stated "We're gonna do this even if it kills us", which it did).

Unlike most of the other main characters, Patrick lacks a nose. Because of this, he generally can not smell (such as in "Something Smells" in which SpongeBob has halitosis). He also chews food with his mouth open (such as in "Grandma's Kisses"). However, in the episode, "No Nose Knows", Patrick receives a nose through plastic surgery. However, when Patrick tries to get rid of every bad smell, SpongeBob, Squidward, Mr. Krabs, and Sandy deform Patrick's nose by building a giant ball of trash and sewage.

Patrick has no steady occupation and spends most of his time sleeping, watching television, or playing with his best friend SpongeBob SquarePants. He often gives advice to SpongeBob that's usually impractical or dangerous, and often gets them both into trouble. When he tries to find work he is shown to have little skill or common sense; for example in "Big Pink Loser", he struggles with simple tasks such as sweeping or opening a jar. His skill is portrayed as doing nothing as shown in "Stanley S. SquarePants" and "Big Pink Loser", in the latter he wins a trophy for "doing absolutely nothing longer than anyone else". Patrick loves the restaurant, Pizza Castle, and he goes there a lot, sometimes more often than the Krusty Krab.

In the episode "Patrick SmartPants", Patrick becomes extremely smart after a freak accident involving brain coral. Despite his innocence, he has also been a criminal several times in the series. Patrick has been referred to as "The Pink Menace", and appears as that character in several SpongeBob video games. Patrick is generally well intended but often ends up in trouble simply out of ignorance. In the episode "Sailor Mouth", Patrick and SpongeBob read graffiti on a dumpster and Patrick says it's fancy talk. They walk around swearing all day before learning the writing is actually "bad words."

Also, in Life Of Crime Patrick and SpongeBob learned from Mr. Krabs that borrowing is okay as long as you bring it back. At the park, SpongeBob and Patrick want to buy a balloon but they do not have any money. They decide to "borrow" a balloon with the intention of returning it later, only to have it pop. Not knowing it was Free Balloon Day, they go on the run as fugitives. Patrick lives at Conch Street next to Squidward Tentacles in Bikini Bottom.

In Party in the Rock Patrick's mother let him have a party at the rock. Patrick was shown to be smarter, worrying, checking all the rooms etc. Characteristic Patrick because duplicate he Uncle Ferguson Star, the most very very stupid starfish. He seems to be smarter when he was younger (1999-2006)

Patrick has also made an appearance in Leader Plankton! as his SB self in the episode The Universe Traveler, which took place the same day as Roller Cowards in the SB universe. He fights with the LP! Patrick in the mirror and punches him.

He is a contestant in SBSP: TRS.

In this show, he has a twin brother named Rich, each of them feeling as though they've grown up in each other's shadow, Rich being so book smart and Patrick being so creative. Pat makes up what he lacks in "smarts" with musical talent, and faithfulness to friends, family, everything. He actually has a job at Mrs. SquarePants' school as the band teacher. Follow him and his friends' adventures to see him prove that maybe he's not so dumb after all.

Patrick is the heavy weapons expert of the resistance. Usually working at SpongeBob's side, he has gotten into many slippery situations.

The End of My Soul

In this fan series, Patrick was a news reporter in Episode 1, until the monster attacked Bikini Bottom. He was a survivor in Episode 2 and lasted until Episode 7.

In Warriors of Bikini Bottom: "What's a (insert name here)?"

In SpongeHype: "That makes no sense, but it's awesome!"

In SpongeBob SquarePants Revolution 0: "Say cheese, you son of a fish!"; "I'd go for the sledgehammer."

"The inner machinations of my mind are an enigma"

"Who ya' callin pinhead?"

"Oreos Are Cookies And I'm King Of The Oreos."

In SpongeBob Teenagepants: "I say you get cool fake teeth."

"Is this Pizza Castle?"

"No, this is Patrick"

In Spongebob And Animal Crossing: “Now That We Are Alone, let’s use those sentence enhancers!” - Go Away! 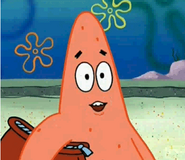 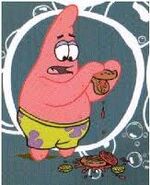 Patrick with a Oreo. 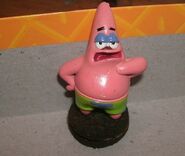 Patrick on a OREO. 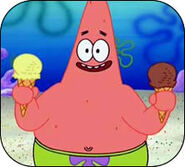 Patrick with a mustache. 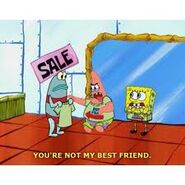 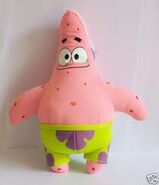 A rough draft of Patrick from Pilot Pitch. 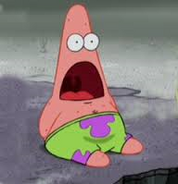 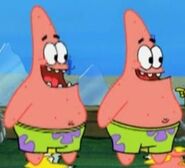 1414771232 the SpongeBob movie sponge out of water-oo3.jpg
Patrick and SpongeBob in CGI animation 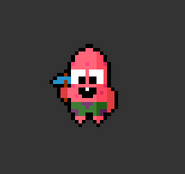 Patrick's sprite from the SpongeBob in Minecraft game. 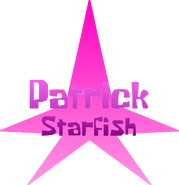 Add a photo to this gallery
Retrieved from "https://spongefan.fandom.com/wiki/Patrick_Star?oldid=543877"
Community content is available under CC-BY-SA unless otherwise noted.