This page is for Pearl Krabs from any person's continuity!

Pearl Krabs is a main character in the original SpongeBob series. She is a sperm whale who lives in an anchor with her father, Eugene H. Krabs. Pearl is voiced by Lori Alan.

Pearl was the second main character that Stephen Hillenburg created for the series. He was inspired to create Pearl while working at the Ocean Institute in California, where he tended to a whale skeleton exhibit and supervised whale watches.

The in-universe difference in species between Pearl and Mr. Krabs has never been addressed in the main show, but the official trivia book states that Pearl takes after her unseen mother, who was also a whale. Stephen Hillenburg was strongly against revealing the identity of Pearl's mom and kept it a secret throughout the show. Many fans have come up with their own theories.

Pearl was born to Mr. Krabs and Mrs. Krabs. She seems to have inherited most of her mother's physical traits and her father's small size. On the day she was born, Mr. Krabs bought a celebration banner on sale. It had the words "it's a boy" on it, so he crossed boy out to write girl. Pearl has had the same bed, which her father got for $30, ever since she was a newborn.

In some fans' interpretation, Pearl would be a possible romantic interest for SpongeBob, since in some episodes of the series SpongeBob gets along well with her, with SpongeBob usually solving some of her problems and even accomplishing a romantic role for her sometimes. In SpongeBob, Patrick, :The Plankton Robot vs The Bowser Robot but she was brainwashed by Bowser then turned into an evil robotic Whale. Pearl Krabs is a character from SpongeBob who is Mr. Krabs' daughter and a whale. In Konnichiku's series, Pearl launches a music career and teams up with Swayzak to record a song called "Stop", which would soon become a hit. 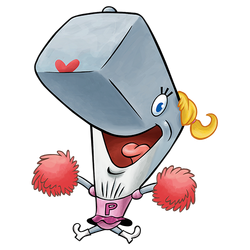 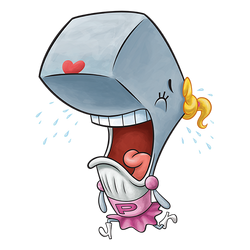 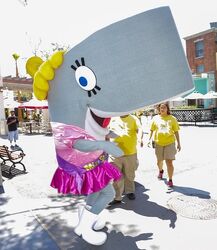 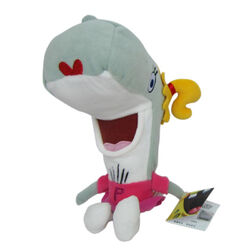 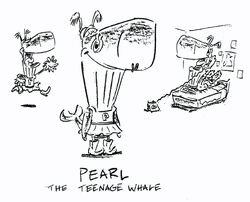 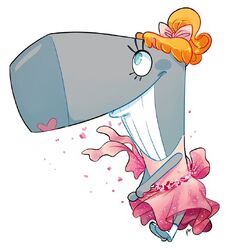 Retrieved from "https://spongefan.fandom.com/wiki/Pearl_Krabs?oldid=542415"
Community content is available under CC-BY-SA unless otherwise noted.