Sandra "Sandy" Jennifer Cheeks is a female squirrel from Texas. She is a friend of SpongeBob and Patrick. She wears an air helmet and an astronaut suit to get oxygen and has a heavy Southern accent. She is one of the Gal Pals, along with Karen, Mrs. Puff, and Pearl.

She played bass guitar for the American-South African band Blue Ink and was the lead vocalist/lead guitarist for the side-project band World of Fire.

In No Malarkey in Bikini Bottom, she managed the presidential campaign of Senator Bernie Sanders.

Sandy spoke with a heavy southern accent, as she is from Texas, and uses typical southern slang words and phrases. She is very fond of her homeland and its culture. Her original home was in Alabama, where she had a lover; her brother, which was un-named and died by urinating on an electrical farm fence. Sandy has been shown to be very proud of herself and almost vain. Sandy is one of the most intelligent and level-headed characters on the show. However, she is known to act without thinking. Sandy is also very athletic. She and SpongeBob share a favorite pastime of karate, and frequently fight each other for fun. The karate they use appears to be stylized to fit that of "play karate", as they both mainly fight with chops and kicks in a cartoonish manner. She also enjoys extreme sports and thrill-seeking. She is also the babysitter of Gary in the series Gary The Snail, and so far Gary likes to say "She's real boring".

She may have a hidden crush on SpongeBob. This is supported by Sandy's pregnancy in SpongeBob n' Stuff's And a Nappy New Year!, though it's implied they split up before the events of The SpongeBob n' Stuff Movie, where SpongeBob falls in love with LightBob and she doesn't mind. However, in Warriors of Bikini Bottom, she dates Tupac and in the events of A Cat Named Kenny, it is impied she has a crush on Benny in Kenny VS Benny.

She and her family moves in with the Fetons when her Treedome was cracked in Squirrentons.

She wears a wetsuit with a helmet, and a flower on top. Whenever in the Treedome, Sandy always wears a purple bikini which always the audience. She is friends with Jervis Tech , and they went to school.

She got turned into a baby in Squirrel Sitters.

Although she is shown to be smart most of the time, in, the Gary The Snail, episode she does not understand a very hard math problem that Doctor Freaky can understand.

She was a captain of the Whales Unit in CoD:NT. In another universe, she became a gangster of Bikini Bottom Killaz.

In SpongeBob Boom, she is one of the main characters. 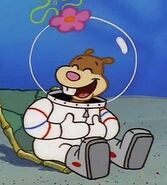 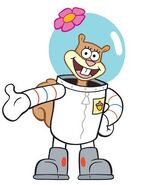 Sandy Makes her first appearence in Tea In The Treedome and last none.. more coming soon

One of her friends 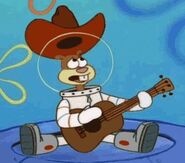 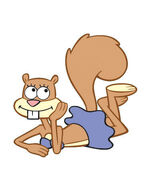 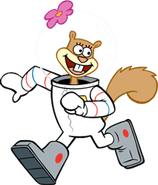 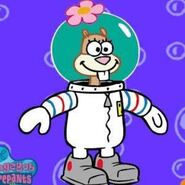 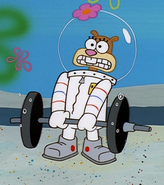 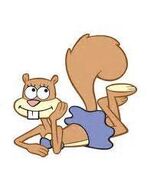 SpongeBob & Sandy in Karate Island
Add a photo to this gallery
Retrieved from "https://spongefan.fandom.com/wiki/Sandy_Cheeks?oldid=546998"
Community content is available under CC-BY-SA unless otherwise noted.