""You should not be afraid to fail. I'm happy and I have suffered 50 years of it!"" ― From New Kelp City on PLWTR

Sheldon James Plankton (age 59 as in The Algae's Always Greener episode) is a dark green Plankton. He is the main antagonist of SpongeBob SquarePants and was the protagonist of the canon episode The Algae's Always Greener. His main goal in life is to steal the Krabby Patty formula from Mr. Krabs, but always fails. He was married to a computer named Karen, but they got into an argument and had a divorce. He used to be married to a piece of holographic meatloaf that tastes like cardboard donuts. He was once friends with Mr. Krabs. He once was dating Shelia Planktona but broke up as he was using her to get the formula. Unfortunately, his plan failed. He has one eye and is a single-cell organism. He has a pet ameoba named Spot. Plankton and Mr. Krabs were best friends before Mr. Krabs created the Krabby Patty recipe.

You just ain't doing it right. 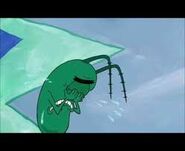 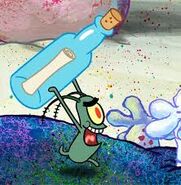 Plankton encounters with his brother, Smithy.

Plankton and all of his family 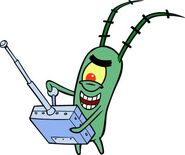 Plankton is holding a remote for something.

Some of Plankton's members were made part of the Krabby Patty.

Plankton with Devon Costello (and His Other Friends) at Bikini Atoll. (In The Battle Of the Cartoons.)

Retrieved from "https://spongefan.fandom.com/wiki/Sheldon_J._Plankton?oldid=516927"
Community content is available under CC-BY-SA unless otherwise noted.