SpongeBob & Sagwa 2 is a platforming action video game developed by Heavy Iron Studios, Nick Games and PBS and published by THQ Inc. The game was released on November 25, 2006 in Canada and on December 17, 2006 in the United States for the GameCube, Xbox, PlayStation 2 and Nintendo DS. It is the sequel to SpongeBob & Sagwa.

The sequel is notable for many changes compared to the original. For example, the designs of the main characters, Sagwa and SpongeBob, are different. SpongeBob is dressed in his Hall Monitor outfit with a Chinese robe and Sagwa wears her alternate Miao family collar as seen in the Sagwa episodes "Royal Cats" and "Ba Do and the Lantern Festival". Puzzle elements were removed and the story has some recycled plot elements from the predecessor.

The game takes place during the timeline of the Jasbre Two spin-off series. During a night at the Lantern Festival, Plankton hatches a new plan up his sleeve. He has awakened a new evil force known as the Amethystmen, a large army of spirits who were rivals with the Jade Bats for thousands of years, and has stolen the secret formula for the Noodle Patty. With China alarmed once again, SpongeBob and Sagwa must embark on their next adventure to get the formula back from Plankton while fighting against the Amethystmen.

Unlike the predecessor, the player is only in control of SpongeBob and Sagwa. Patrick is excluded from the game as a playable character. The gameplay is also different. SpongeBob and Sagwa can work together to use formations and attack combos for climbing up to high places, swimming across water, crossing hazardous areas and so on. Each level contains three normal stages, one boss stage and three bonus stages. The final level, however, has four normal stages, two boss stages and four bonus stages. There are three different kinds of items in every level - Amulets, Noodle Patties and Garnet Detectors and they each serve a different purpose. SpongeBob and Sagwa gain synergy from every enemy they defeat. When they have enough, they form an "Ultimate Tag Team" attack, which makes them invincible for a short period of time and can defeat enemies in a single hit. The number of lives starts off at five, but can grow if the player collects an Extra Life. If either SpongeBob or Sagwa touch an enemy or a hazardous surface/object, they will lose a life.

Bonus stages are unlocked when the player manages to collect all Noodle Patties in a certain normal stage. They can range from obstacle courses to mission-based stages, such as collecting all Stinky Tofus within a time limit. 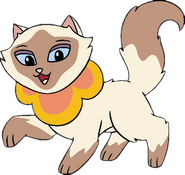 BOSS: Rosester (which is "rooster" and "rose" combined)

As a follow-up to the SpongeBob & Sagwa (2004 video game) campaign, SpongeBob & Sagwa 2 was promoted by Nickelodeon and PBS in the same fashion. The campaign lasted from October 29, 2006 through December 16, 2006, thus ending the day before the official release of the game. One of the most notable examples of the promotional campaign for the game is a television event known as "The Cat & Sponge Marathon", which was a compilation of random episodes of SpongeBob SquarePants and Sagwa the Chinese Siamese Cat. The event aired on Nickelodeon from November 14, 2006 through December 11, 2006 just six days prior to the release of the game in the United States. A total of eight episodes made it into the marathon. Three of the episodes are returning choices from the DVD, Purr-ous Pals. The episodes included in the marathon were:

Another example of materials promoted in the campaign is a SpongeBob & Sagwa Happy Meal toyline for McDonald's. Toys included in the toyline were individual action figures of Sagwa, SpongeBob and Plankton as well as toys of SpongeBob and Sagwa together playing games like leapfrog and performing stunts.

Like its predecessor, SpongeBob & Sagwa 2 was met with generally mixed reviews. While the soundtrack, graphics and voice acting were praised and the gameplay was considered to be astounding compared to the original, the story was criticized for having recycled elements from the predecessor, which was described as a "lazy move" and said that the redesigns of SpongeBob and Sagwa were considered "a little unnecessary".

Some reviews on the game were positive as critics described it as a "massive improvement upon the original" while saying it "has a passable story, but incredible gameplay, beautifully rendered graphics and an epic soundtrack". The Nintendo DS version of the game was praised for its simplistic and fair gameplay, decent level design and great controls.

Eventually, the overall reception of the game went from mixed to positive as critics consider SpongeBob & Sagwa 2 to be the greatest installment in the video game series.

"SpongeBob & Sagwa 2 is, by far, one of the greatest crossover video games worth a play." ― Gamespot

"This game transforms two innocent children's shows into something more incredible and thrilling... in a good way!" ― GameZone

"While the plot can be described as somewhat lackluster compared to the original SpongeBob & Sagwa, the graphics are great, the musical score is remarkably astounding and the gameplay is simple, but can sometimes get confusing." ― IGN

"Just another lousy sequel not worth spending your hard-earned cash on." ― Some biased IGN critic

"SpongeBob & Sagwa 2 is amazing! Its story may have recycled plot points, but it is a huge improvement upon its predecessor, with its colorful and incredible graphics, simplistic yet fast-paced gameplay and atmospheric soundtrack." ― Metacritic

"Sagwa and Spongebob have done it again.I'm glad that this is a improvement from the last game and hope the others keep getting better.I also had no idea there was a series.Maybe I should check it out!This is awesome and deserves a award" ― A random guy on the street

"The plot could have been better, but that doesn't matter in the case for this game, not even in the slightest. SpongeBob & Sagwa 2 is awesome! It deserves to be ranked as one of the greatest crossover games ever made! Another job well done, THQ!" ― Another random guy on the street

"Sagwa and SpongeBob truly make a great crossover duo in this game!" ― IMDb

Retrieved from "https://spongefan.fandom.com/wiki/SpongeBob_%26_Sagwa_2?oldid=385249"
Community content is available under CC-BY-SA unless otherwise noted.