Squidward Quincy Tentacles is an anthropomorphic octopus who lives next door to SpongeBob and Patrick. He is the deuteragonist of the SpongeBob SquarePants series. He is also one of the main characters in Patrick's New Life. He still lives with SpongeBob now, but they don't show him very often anymore on the main SpongeBob SquarePants show because he is the star of some other shows, such as Squid vs. Squid and Squidward Chat. He has a love crush on Squidney Weely. He is a former pro wrestler in a company called WWC. He got the style of WWE wrestler William Regal. He is the King of the Ring 2009 winner. He was inducted into the Hall of Fame in 2015. In SpongeBob n' Stuff's Temmie n' Stuff sub-series, he is the royal butler in Temopolis to King Tem, Queen Tem and Temmie.

In SpongeBob Boom, he is one of the main characters.

In No Malarkey in Bikini Bottom, he is a supporter and donor of the Bernie Sanders campaign.

Squidward serves as the third main character of both series, the real one, and almost every fanon one. He appeared in many episodes since the show started, but had very few appearances in the last two seasons. This is commonly tied to him leaving for his new spin-off series,The Squidward Show. He has moved on to star in Squid Vs. Squid and Awkward, Octopus for a slightly younger audience. He came back to the show SpongeBob SquarePants because Patrick and SpongeBob got less annoying. Squidward plays Clarinet. Squidward was created in 1999 when he was 26 years old. In the episode Up and Down, he got blocked out after messing up the national anthem at Bikini Bottom Stadium.

Prior to the events of Season 8 and Season 9, Squidward left Bikini Bottom to get away from his annoying neighbors and to finally live his dreams. He now stars as the main character in his spin-off series, The Squidward Show. An upcoming fan episode called Squidless in Bikini Bottom features the other main characters struggling to accept his absence, with SpongeBob and Patrick trying to look for a replacement for Squidward. Luckily, he came back one day because SpongeBob and Patrick got less annoying and wherever Squidward stayed, his neighbors were way more annoying than SpongeBob and Patrick. He went to the east. He became the leader of the eastern bottom and save the nation from attack Mongol and tartar.

At the last episode of Season 9, Squidward returns to Bikini Bottom. And comes back to find Bikini Bottom in the distance future and is now renamed Bikini Blossom and Hamilton characters live there too.

This gallery contains pictures of Squidward and title cards of fanon episodes based on him. 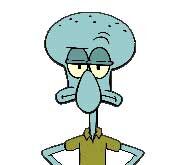 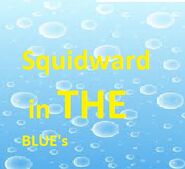 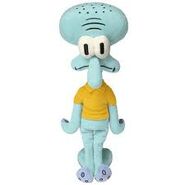 Squidward on the title card of Kill Phil. 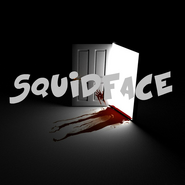 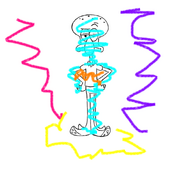 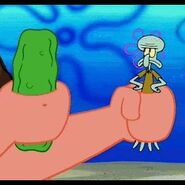 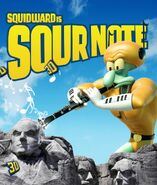 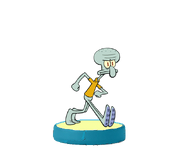 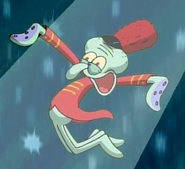 this is the signature of Squidward Tentacles

Add a photo to this gallery
Retrieved from "https://spongefan.fandom.com/wiki/Squidward_Q._Tentacles?oldid=547565"
Community content is available under CC-BY-SA unless otherwise noted.